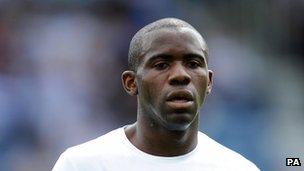 In the light of the controversy about advertising claims that God can heal today, it was interesting to see that even the generally secularist BBC has published an article suggesting that prayer for physical healing may well be effective. The BBC Home Editor, Mark Easton, has written an article Prayers for Muamba. This is about the Premier League footballer (i.e. soccer player) Fabrice Muamba, who was taken ill during a match on Saturday, and remains in a critical condition.

Have you prayed for Fabrice Muamba today? His family are exhorting the country to believe in the power of prayer, and I suspect many millions of Britons, whether they have faith or not, will have felt moved to offer a silent appeal to an invisible power asking that the young footballer pull through.

The front page of today’s Sun newspaper is devoted to the headline “God is in Control” below the subheading “Praying for Muamba”. …

Easton continues with a summary of scientific studies on the effectiveness of prayer, going back to Sir Francis Galton in 1872 – but not mentioning the study I recently posted about. He notes a 2007 literature review from Arizona State University:

The study looked at 17 previously published papers and found that “patients who received intercessory prayer demonstrated significant improvement” in seven of those. However, there were questions about the validity of some of the research and the evidence was not sufficient for “prayer” to meet the criteria required for an “empirically supported treatment” in the United States.

(If the Advertising Standards Authority had acted properly in response to the HOTS Bath claims, they would have appealed to a study like that one rather than simply refusing to consider any claims of physical healing.)

Nevertheless, Easton concludes by encouraging his readers to pray for Muamba:

Whatever you might think about its links to a supernatural being, intercessory prayer is a straightforward way for an individual to focus the mind on their capacity to think nice thoughts. Anyone can close their eyes and make a wish that bad things do not happen. Right now, Britain is praying that Fabrice Muamba makes a speedy and full recovery.

Not exactly how a Spirit-filled Christian would put it, but nevertheless it is quite something for the BBC to publish even this. Indeed I can’t help wondering if someone will complain about it to the Advertising Standards Authority. But it seems clear where public opinion lies on this one.

Let us pray together that God touches Fabrice Muamba and restores him quickly to full health and strength. Amen.

0 thoughts on “BBC: Pray for sick Muamba, it might help”