The problems with my site were linked somehow to the original version of this post. One issue was that no comments could be made on it. So I am reposting it with a new URL, and deleting the old post. Hopefully this will fix the problem.

I am reposting here, with permission, a comment on my post Why can’t we tolerate post-gays as well as gays? This comment is by “Iconoclast”, who comments here regularly but anonymously:

I am not certain that it is the case that churches ‘fear’ homosexuals so much as fearing sanitising something that up to quite recently, was universally regarded as sin.

If you are asking the church to accept homosexuality as being quite normal for some people and acceptable for christians (so long as it is monogamous and faithful), then you have to appeal to wider themes of love and tolerance and give them precedence over what is specifically said about homosexuality in the Bible. You may even need to go so far as to introduce a new doctrine of marriage.

Rather than just using specific texts, the male/female motif of sexual expression as being normative is overwhelming throughout the Bible and when homosexual expression is mentioned then it is invariably negative. The other approach to take is that the biblical prohibitions regarding homosexuality are culturally determined and we can largely dismiss them today. One problem here is that the more liberalising , concessionary and less restrictive tendencies say towards slavery and women, that is found in the New Testament as compared to the Old, is not reciprocated in the case of homosexuality which continues to be viewed in the NT with strong disapproval.

Do we now consider ourselves to be sufficiently enlightened in the 21st century that we can confidently disregard such strictures? If so, then how can we be sure we can do this?

I am not scared or fearful of homosexuals, but I do fear strongly that the church may sanctify something that God regards as sin. If this is the case, then it must surely have implications for the church as a whole and as with the seven churches in Revelation, we may find our ‘lampstands’ being removed. And that is a fearful prospect indeed.

I think Iconoclast has hit the nail right on the head here, except that I prefer “churches” to “the church” as there is nothing like a united view on this among Christians. The very word “homophobia” implies a charge that those guilty of it, or suffering from it, are afraid of homosexuals, and that this is a psychological condition. But, at least in the case of most Christians, this is a complete misunderstanding of the situation.

To summarise Iconoclast’s comment, if you want churches to accept homosexuality as normal, you have to persuade them to reject the apparently clear biblical prohibitions. And that is never going to be easy in any church which accepts the Bible as authoritative – even if they accept N.T. Wright’s words, as linked to in my post yesterday:

the notion of the ‘authority of scripture’ is a shorthand expression for God’s authority, exercised through scripture.

Such churches, ones which consider themselves in any way evangelical, will accept homosexuality as normal only if they can be persuaded that word of God as found in Scripture does not contradict this. Now arguments can be made, and have been, that the small number of Bible passages which appear to prohibit homosexual practice do not apply today. In this post I am not trying to decide whether these arguments hold water. Rather, my point is that the only way for the gay community to win over evangelical churches is by convincing them with biblical arguments. 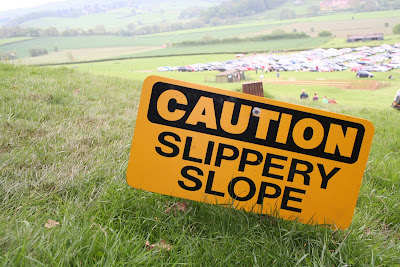 In comparing homosexuality with slavery and the status of women, Iconoclast seems to allude to the “slippery slope” argument, that accepting equality in one area will surely lead to accepting it in others. This came up at the same time in a different thread on this blog, in comments on my post A Breakthrough on Paul and Women (1 Timothy 2:8-15), where I wrote:

Sometimes it is hard to know where to stop, and it can look as if we are setting off down a slippery slope. See some comments I made five years ago about A Solid Rock Ledge on the Slippery Slope. But I guess I am not as confident now as I was then that there is an identifiable solid rock ledge that we can hold on to. Underneath is the solid rock, for sure, but perhaps it is all covered with slippery wet grass, and we have to choose and make our own footholds where we believe it is appropriate for our situation. Well, perhaps – more discussion needed.

Perhaps the gay community, or at least the gay lobby, in fact wants the church to fear them. They make threatening accusations against Christians to frighten them into changing their teaching. But if they looked at church history, or even at the current situation in countries like China and Iran, they would soon realise that such tactics of persecution are usually counter-productive, tending in fact to strengthen the church and reinforce its distinctive doctrines. The reason is simple: true Christians refuse to fear any human beings as much as they fear God. And rightly so, for turning against God is, in Iconoclast’s words, “a fearful prospect indeed”.