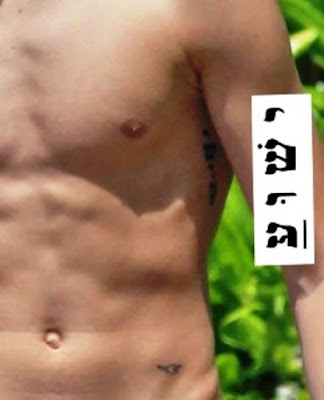 Teen idol and professing Christian Justin Bieber has a new tattoo, it is reported, and the tattoo reads יֵשׁוּעַ, i.e. the name “Jesus” in Hebrew. At least it should read that if correctly spelled, which it is not in the text superimposed on the image I reproduce here.

This image is allegedly of part of Bieber’s body. But I had trouble finding the supposed “Jesus” tattoo. The mark to the right of Bieber’s navel is presumably the seagull tattoo mentioned in a Los Angeles Times article. But where is the new tattoo? Apparently it is what is just visible in the image underneath the armpit.

What message, I wonder, is 17-year-old Bieber trying to put across by having the name of Jesus written on one of the most hidden and smelliest parts of his body? In an interview last November he clearly stated:

So perhaps he intends to honour Jesus by having his name tattooed on his armpit. But I can understand some thinking that in fact he intends to ridicule the name by his choice of where on his body he had the tattoo done.

Here in the UK he would not be allowed to get a tattoo, as he is under 18. The law sensibly protects minors from having their bodies disfigured in ways they might regret in adulthood. Unfortunately Bieber, a Canadian who is said to have had his latest tattoo done in Israel, has not benefited from this protection. But from this point of view it is perhaps for the best that the tattoo is in an easily hidden place.

This time it is not Joel Watts but his co-blogger Gez who is the author of the post at Unsettled Christianity where I found this news, The new Bieber Jesus tattoo. No doubt they have chosen this topic in an effort to lift their end of the month Alexa ratings enough to dethrone Jim West from his #1 Biblioblogger spot. So I offer this post to support their effort – and hoping it won’t do my own ranking any harm. Anyway I am following in a venerable tradition of bibliobloggers such as John Hobbins and David Ker posting about celebrity tattoos.

CORRECTION: The correct Hebrew spelling for the name “Jesus” is not יְשׁוּעַ as I wrote at first, but יֵשׁוּעַ, i.e. with the sign for a long “e” (tsere) rather than a short one (sheva) under the initial consonant. Both are pronounced “Yeshua”. Bieber’s tattoo artist presumably didn’t know which to use, as he seems to have omitted this vowel sign completely.

11 thoughts on “Justin Bieber's Jesus tattoo: why in his armpit?”