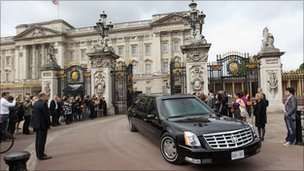 The US government has been sent a London congestion charge bill for Barack Obama’s convoy, including his limousine, nicknamed The Beast. …

Transport for London has confirmed that the Presidential convoy was charged but the bill has not been paid.

In fact there is an ongoing dispute here:

Several embassies refuse to pay the £10-a-day charge for driving in central London, claiming they are exempted from local taxes.

The total bill stands at £51m and the US, Russia and Japan are the top three in the list of non-payers.

The US embassy owes more than £5m (probably about $8m), an amount which must be rising quickly as each vehicle in Obama’s motorcade racks up the charge. As the Mayor of London has argued, this is

not a tax but a charge for services.

It is mean and wrong for foreign embassies not to pay what the rest of us have to pay for use of the capital’s roads. And I can’t help wondering, are British and other foreign diplomats in the USA exempted from the tolls on US freeways and bridges? If not, they are not only mean but hypocritical.