An ancient poet, not Euripides, wrote:

Those whom the gods wish to destroy they first make mad. 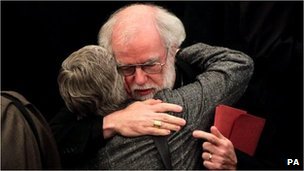 If we replace “gods” with the three persons of the Trinity, is this what is happening to the Church of England?

Certainly the church seems to have gone mad. Having decided in principle that it wants women as bishops, it has spent years going round in circles trying to find an acceptable formula for this, only to reject its chosen formula today, by a narrow margin. That is not the action of a sane and rational body. And it is a sad farewell for outgoing Archbishop Rowan Williams.

I’m not quite saying that today’s vote was irrational, because it may be that the proposed compromise with opponents was so insane that it was rational to reject it. Surely one can doubt the sanity of anyone who tries to push through a compromise which is completely rejected by one of the parties involved. But would that party have accepted any compromise?

It seems to me that the only way ahead now is the one suggested by Sam Norton in his post Please can we now do women bishops the right way? There is no future in trying to compromise between black and white. As the Apostle Paul asked, “what fellowship can light have with darkness?” (2 Corinthians 6:14, NIV) Of course, each side will say that they are light and their opponents are darkness, but that just proves the point. So, just as on the first day of creation God “separated the light from the darkness” (Genesis 1:4), at this point there needs to be not a compromise but a separation. We just need to make sure that the kinds of procedures Sam outlines are followed. Then, unlike what has happened in The Episcopal Church in the USA, the separation can hopefully be an amicable one which does not lead to lawsuits and mutual anathemas. 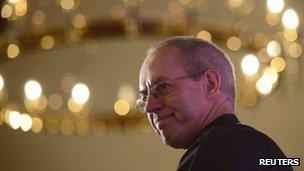 Of course if the Trinity really wishes to destroy the Church of England, no human scheme will be able to preserve it. But it may not be too late for that body to repent, put its house in order, and find itself again under God’s blessing. Archbishop-elect Justin Welby looks like a good choice of leader for this difficult task. Today’s vote will have made the task harder, but the long term result just may be a cleaner and so stronger Church of England.

11 thoughts on “Restoring the Church of England to Sanity”