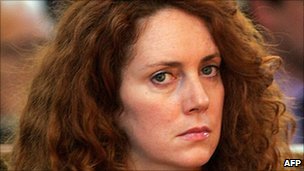 Today at the inquiry, as the BBC reports, it was the turn to give evidence of Rebekah Brooks, former editor of the Murdoch newspapers the News of the World and the Sun, and then Chief Executive of  Rupert Murdoch’s company News International until she was forced to resign in 2011.

It has long been known that Rebekah is a personal friend of Prime Minister David Cameron. So it is hardly surprising that they exchanged regular text messages, although she has called allegations that he texted her 12 times a day while opposition leader “preposterous”.

But what really seems preposterous is this part of Rebekah’s evidence:

She said the prime minister signed off most texts with the letters DC but occasionally used the acronym LOL.

But she said he stopped this when he learnt the text shorthand stood for “laugh out loud” not “lots of love”.

In other words, David Cameron, a married man, was in the habit of trying to send “lots of love” to this woman friend, but he in fact completely failed to do so! I’m not sure which is more concerning, that he would have this kind of relationship with a newspaper editor, or that he would be so incompetent at expressing his love. I’m sure Rebekah indeed laughed out loud when she found out what was happening.

I hope these revelations don’t cause difficulties between David and Samantha Cameron or between Rebekah and her husband Charlie Brooks. But I would be pleased if they signal the end of the far too cosy relationship between the British government and the Murdoch controlled press.