by Allan R. Bevere. When I have time I will be reading and reviewing it, especially in the light of the discussion relating to my post Is every Christian in politics a “Dominionist”? But I am likely to be too busy to do this for the next few days.

Meanwhile I have a couple of links and quick thoughts to share on the subject of Christians in politics. 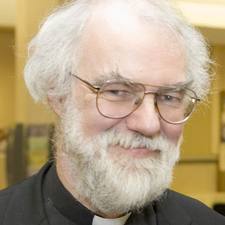 Rachel Marszalek, newly ordained in the Church of England, reports on a visit to her diocese by the “notorious” Archbishop Rowan Williams. Part of her post is about a talk by the Archbishop “Making a Witness in the Public Square”. Here are some of his words as summarised by Rachel:

When you come into the body of Christ, you are to be loyal to God’s vision for the human race, over and above ethnic, National and even, swallow hard, family loyalties. It calls you also to be loyal to something that has not yet happened. For the Roman Empire this was seen as a rival claim. But we can not be loyal Roman citizens and in choosing not to be, death was the consequence for some. Christians work out a theology of citizenship which means that the country itself can not be treated as a god. …

The Roman Empire got it wrong in seeing Christianity as a rival claim. But the church was a great, big organisation. It was one legal system against another. The church has to step back and not compete for territory.

When is it right not to obey the law, asks Stringfellow…when the law seems to be going in the opposite direction to God’s vision. Stringfellow proposes vocal advocacy – we do this and we take the consequences. Civil disobedience is not something Christians should never consider. We have to be able to say to the state – by what authority can you do this if it defies a Godward direction?

What can I say? Rowan Williams clearly wouldn’t endorse the kind of conservative Christian involvement in US politics which has been much discussed, and misrepresented, in recent weeks. But he would also reject the idea that Christians should keep out of political discussions and retreat to their own communities. These are thoughts I will bear in mind as I read Bevere’s book.

Meanwhile Scot McKnight writes about Politics and Religion, the American Odyssey. A large part of this post is a discussion of the role of George Whitefield in pioneering Christian political action in North America. He finishes with some questions about how far Whitefield’s example can be followed today (emphasis as in the original):

Many may be uncomfortable with Whitefield’s attention to political issues in England and the USA, but there’s a big question here we need to discuss: Can a Christian pastor completely ignore the political? While the Anabaptist vision, as compared with the Catholic, Lutheran and Reformed views, may prefer more separation from the State and political issues, can the Christian preacher ever avoid the implications of the gospel for politics?

I will ponder these questions, and maybe some time I will attempt to answer them.

0 thoughts on “Christians and Politics: Williams and Whitefield”