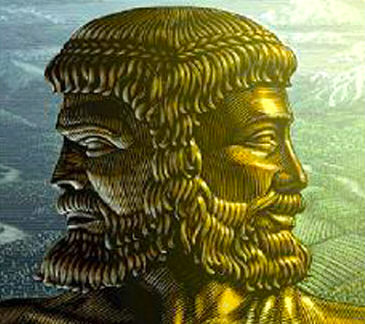 Which does Pastor Mark Driscoll believe? That God loves everyone, or that God hates most people? Like the Roman God Janus he seems to have two different faces, and he can’t make his mind up which to present to the public.

Scott Bailey has quoted from a video by Driscoll, which was formerly posted at his church’s website but has since been taken down (annotations apparently by Zack):

The sermon this is taken from is new, but there is nothing new in Driscoll’s sentiments. Here at Gentle Wisdom I reported him saying much the same in 2007, in my post What Driscoll really said about God and hate, which included

The whole “God loves you and has a wonderful plan for your life” — that’s the wrong place to start. “God hates you and its going to go really really bad forever!” – hey now that is true…

But a completely different face of Driscoll is seen in his response when Fred Phelps and his family threatened to picket his church, a blog post from June this year with the long title Westboro Baptist Church, This False Prophet and His Blind Lemmings Welcome You to Our Whore House for God’s Grace and Free Donuts. (Thanks to Jeff commenting on Scott’s post for the link.) In this post when Driscoll writes:

God does not love everyone—in fact, He hates the majority of mankind, and has purposed to send them to hell when they die.

he is quoting, and then rejecting, the teaching of Westboro Baptist Church. Driscoll continues:

The whole ”read-the-words” of the Bible thingy is actually pretty good advice. And in reading the Bible, we see that it says everyone is loved by God, and though not everyone is saved, anyone who turns from sin and trusts in Jesus will receive eternal life. Additionally, we know that it’s not God’s hatred that leads people to repentance but instead his kindness (Romans 2:4). Here are some Scriptures that speak plainly about God’s love for people:

Driscoll offers a more nuanced presentation in his recent FAQ: Predestination and Election. Much of this is a fair presentation of the issues between Calvinists and Arminians. In it he mostly avoids the “hate” word. But the generally Calvinist tendency becomes clear in the section “Answers To Common Questions About Predestination & Election”, which omits from its long list of Bible verses discussed the “Arminian” verses Driscoll chose to quote to the Westboro Baptists. Just before he confirms that his own position is more or less Calvinist (although he calls it Augustinian), Driscoll writes:

Does God love the non-elect?

Yes, he does, and does so with common grace (Matt. 5:45). Yet he also has a special affection for the elect. So, God loves everyone in a general way, and also loves the elect in a saving way.

God brings a person into the world to be tortured endlessly as an object of his vindictive hatred, but his love for said person is clearly demonstrated by a brief period of ‘common grace’?

If Driscoll really believes what he wrote to the Westboro Baptists, why isn’t this material included in his FAQ? And why is there no explanation of how he apparently believes in two contradictory things, that God hates many people and predestines them to hell, and that God loves everyone and wants them all to be saved?

So why the contradiction? Could it be that Driscoll is just so naturally combative that he always takes the contrary position to anyone he is discussing these matters with? Perhaps more probably he does in fact take the moderate Calvinist position outlined in his FAQ, but sometimes in his preaching he gets carried away with “God hates you” type language and so goes against his own theology. That would explain why the offending video was taken down.

But what does it say about Driscoll as a preacher if he is so little in control of what he says that he makes unintentional public statements like this? With this hate speech he is not only denying his own theology, he is bringing the Christian faith into disrepute. At least Fred Phelps is consistent in how he spews out hatred. If Mark Driscoll really doesn’t have the same beliefs, why does he sometimes say the same things?