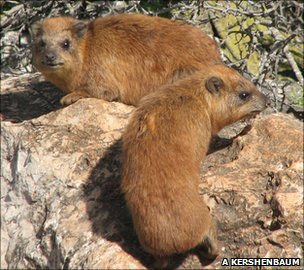 Most of the animals mentioned in the Bible are quite familiar to English speaking readers, although some of the birds are rather obscure. But there is one small animal mentioned several times in the Old Testament which is a bit of a puzzle to many readers, not least because it goes by so many names: “coney” (KJV, ASV, NIV 1984), “badger” (RSV, NRSV, CEV, CEB), “hyrax” (NLT, HCSB, TNIV, NIV 2011), “rock badger” (GNT, NCV, NKJV, ESV), “marmot” (The Message) (all renderings in Proverbs 30:26). As Agur son of Jakeh teaches,

hyraxes are creatures of little power,
yet they make their home in the crags.

So it is interesting to read a BBC Nature report today (incidentally misquoting KJV) Hyraxes: why Israel’s ‘rock rabbits’ have become pests. Apparently these cute furry creatures “have moved into residential areas of Galilee”, where they live in piles of rubble, artificial equivalents to their favoured crags, and “have been destroying people’s gardens”. As they are not kosher (Leviticus 11:5), eating them would not be a solution. So, the BBC report concludes,

Although hyraxes are generally quite popular with suburban wildlife-watchers, some people have called for a cull.

But early research indicates that simply filling in the boulder piles would drive hyraxes out of the villages and back to the cliffs, just as it says in the Bible.

If only the BBC would broaden its recognition that problems can be solved by doing things “just as it says in the Bible”!