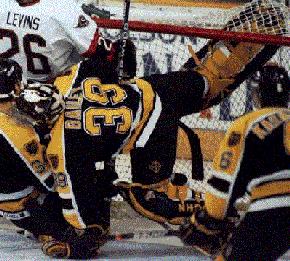 Scott Bailey when he was a professional ice hockey goaltender

I was rather enjoying Scott Bailey’s series Does Higher Criticism Attempt to “Destroy the Bible”? This was teaching in simple language some important lessons about how to approach the Bible.

But when Scott came to the fifth post in his series his presuppositions started to show. Indeed this post is little more than a summary of them. But Scott’s position became really clear when I tried to engage with him in the comments on this post. I summarised his first response to me as

You clearly reject as “delusional and willfully ignorant” anyone who believes in any kind of spiritual world interacting with our world today.

how it works, that it works, and do it under repeatable, verifiable, testable conditions.

But when I suggested that his insistence on “repeatable, verifiable, testable conditions” for any tests of spiritual activity implies that

large parts of modern science, including almost all geology, evolutionary biology and astronomy, are invalid because they are based on observation rather than repeatable experiment,

Are you really that stupid and unaware of the different scientific methods and disciplines? … it’s hard for me to fathom someone could seriously write that. Perhaps the most idiotic thing you have commented here.

Well, I’ll let my readers judge who is being “idiotic” here. Of course there are different scientific methods in different disciplines. But he is trying to argue that it is “delusional” to speak of interactions between the material and the spiritual world because they cannot be proven by the experimental methods used in one particular set of disciplines – although they can very likely be demonstrated by using observational methods which are accepted in other scientific disciplines.

Now I accept that good observational evidence needs to be found for any claims for example of healing as a result of prayer, and that it is hard to find such evidence. But to claim that it is “delusional” to believe in such healings unless they can be performed under repeatable laboratory conditions is quite unreasonable. It is also offensive to astronomers, evolutionary biologists etc whose work, if the same standards were applied to it, would also have to be written off as “delusional”.

Yes, Scott has some uncomfortable bedfellows here, creationists who argue against evolution and an ancient universe because these scientific results are based only on observation of fossils, distant galaxies etc and not on experiments done “under repeatable, verifiable, testable conditions”.

Scott, you, like “Every single person in the western world”, have been “inculcated, socialized, and deeply, deeply ingrained into Enlightenment categories of thinking” – to quote your own words. But that does not imply that those categories are objectively correct and that all others are false. The excellent scholar does not blindly accept the categories of thinking he or she has been brought up with, but questions these paradigms and is prepared to transcend them. Great scientific advances have been made by those like Einstein who were able to think in new categories. But second rate scholars like Bultmann, as I discussed recently, continue to think in the old ways long after they have been discredited. Scott, you might think it a compliment to be compared with Bultmann, but I don’t mean it as such when I suggest that you are making the same mistake as him.

28 thoughts on “Scott Bailey in bed with creationists!”