On 1st April this year I reported a minor earthquake in Blackpool, north west England, that was probably not the fulfilment of Mark Stibbe’s prophecy. But it is now all the more clear that this was a result not of God’s judgment but of human folly. 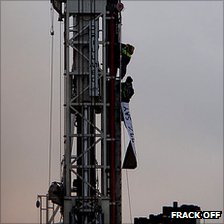 On 31st May I posted a follow-up suggesting that the Blackpool earthquake, and a second tremor in the same place, might have been caused by tests of “fracking”, underground explosions set off deliberately to release natural gas from rock. The suggestion was not that the earthquakes were artificial, but that small artificial explosions in unstable rock had triggered the much larger release of energy of the earthquake. The drilling company suspended its tests and commissioned a study by The British Geological Survey.

According to the BBC today, this study has now been completed and reports that the fracking tests were the “likely cause” of the earthquakes. It also suggests that an “unusual combination of geology at the well site”, unlikely to recur, made the tremors possible. But anti-fracking protesters who have climbed a drill rig at a nearby test site are not convinced:

A spokesman for Frack Off said: “This report does not inspire confidence, they should have done their research before drilling began.”

He added: “Can we believe anything else the industry says when it talks about the safety of fracking?”

Indeed. This looks like a case of carelessness. Nowadays companies are not usually allowed to do anything without a formal risk analysis, even where the possible consequences are trivial. But it seems as if this company went ahead, without a proper study of the risks, with a venture which could have caused serious damage and loss of life. It was by the grace of God, not by human foresight, that the resulting earthquake was so minor and caused almost no damage.

I wonder, can the company be prosecuted for health and safety violations? These would be genuine ones, rather than the spurious ones recently used as an excuse for closing St Paul’s Cathedral in London.

Fracking has the potential of releasing large quantities of the valuable natural gas which all the world needs for heating and other power needs, and which our country needs to avoid being dependent on imports as the North Sea reserves run out. But it is also a technology with its dangers. Therefore it needs to be regulated carefully, and the companies involved in it must be held responsible for any undesirable consequences of their actions.