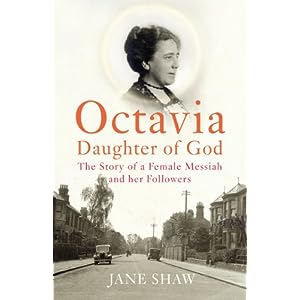 For me this was the misprint of the week, at least: I was reading a print copy of The Week, a weekly news magazine, and found in it a review of the book Octavia, Daughter of God

, which sounds like an interesting story of an early 20th century cult in Bedford, England. Actually I can’t help wondering if this Panacea Society has now become the Beaker Folk of Husborne Crawley: a matriarchal community of pedantic ex-Anglicans obsessed with doilies, and still in Bedfordshire. Or is the author Jane Shaw, a British Anglican priest who is now Dean of Grace Cathedral in San Francisco, the real Archdruid Eileen?

The review mentions how the cult’s founder, who called herself Octavia, started by recruiting “twelve female apostates”. Really? Well, these twelve were very likely apostates from the true Christian faith. But I don’t think that is what the reviewer intended. Indeed there is another review of this same book online from the Literary Review, which is extremely similar to the one in The Week but not identical – it lacks the mention of doilies. And the wording in the Literary Review is

soon Octavia had recruited twelve female apostles and many more resident members, establishing a religion with its very own Garden of Eden in the streets of Bedford.

So, female apostles, or female apostates? Or does some sub-editor not know the difference?

Someone else who might not know the difference is David Devenish, whose book Fathering Leaders, Motivating Mission

is being promoted through a series of extracts on Adrian Warnock’s blog. In the extracts Devenish answers the question “Are there apostles today?”, and in one of the posts he lists among biblical apostles “Andronicus and Junias”. He repeats the name “Junias” in a later post, showing that this is not just a typo. But he shows no sign of being aware that scholars now agree that this name found in Romans 16:7 is in fact a female one, “Junia”, as in NIV 2011 and explained in a note on the verse in the NET Bible. If Devenish accepts Andronicus as an apostle (which the NET Bible does not), then he needs to accept that the woman Junia was also an apostle.

Devenish argues that there are apostles today, and I agree with him. But can there be women among them? I don’t see why not. Even if the positive example of Junia is discounted, I can see no scriptural argument against them – after all, their ministry is not one of teaching or of leading churches.

But, as I discussed last week in my post Addicted to Arguing? How to persuade others, the best way to make my point on a matter like this is to tell stories. And I have one to tell here. Recently I met an American lady who calls herself an apostle, indeed uses that as a title, Dr Rebecca Murray. Her web page says that

As a Pastor to Pastors, she operates in the apostolic and prophetic realms.

She is also co-pastor of a church in Virginia, USA. And she is a wonderful lady with a huge vision and the gifting to make it a reality. If anyone doubts whether female apostles exist today, they should meet Apostle Rebecca.