There have been some interesting comments on my post Gandhi and Rob Bell, newfrontiers and Hell, which led me to link the frosty response from some quarters to Rob Bell’s book Love Wins

(which I still haven’t read) with the different ways in which people’s brains work. 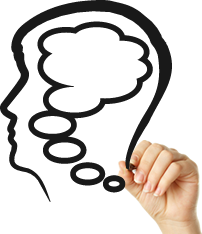 My friend Heather France runs a company Whole Brain Thinking offering brain profiling, which “can help in any aspect of life and work”. An adult profile can be done online for £35. Heather has posted on the company blog my story of how having my profile done helped me to find my wife:

Lorenza and I were just friends when we both went to a brain profiling workshop run by Heather France. But it turned out that we had rather similar brain profiles. This meant that we were put in the same small group for a fun exercise. We enjoyed working together on this and started to realise how much we had in common. Soon after this I asked her out. …

I write this here largely to demonstrate that I know what I am talking about concerning left and right brain thinking. For the record, I am a left-brainer but not very strongly so. There is more to the profile than this: for example, in my brain the L1 quadrant, “Analytical and factual”, is dominant – as my readers could probably guess.

To get back to Rob Bell, the issue came up in comments by Robert Slowley. I discern that Robert is left-brained from his detailed analysis of the NIV 2011 update, which I used in my post on that version. In fact this probably means that his dominant quadrant is L2, “Organised and detailed”. Robert wrote:

That’s what I find frustrating about Bell, he’s not clear at all about what he really thinks.

I think Bell has far more defined answers than he’s clearly indicating publicly on these issues, and as such I wish he’d just plainly reveal them.

Despite my attempts, I could not convince Robert that Rob Bell may simply not have any firm and fixed position on the matter in question. Bell may simply be unsure whether Gandhi or indeed anyone at all is going to hell. After all, the matter is left somewhat ambiguous in the Bible. Yet Robert cannot accept that Bell’s answer, if pushed, might genuinely be “I don’t know”.

Now I don’t want to pick on Robert Slowley here. His is simply one example of the thinking commonly found among more conservative evangelicals, especially those in the Reformed camp but also among fundamentalists and dispensationalists. Many of these people show by their words and actions that they are left-brainers.

The following is adapted from my comments in response to Robert Slowley’s:

I can understand the frustration of some, especially those from a more Reformed background, at being unable to pin Bell down to a specific position. But surely this is the right attitude to take about a matter which God has not made completely clear in his revealed word. While liberal Christians may go too far with this doubting and questioning approach, evangelicals are often obsessed with finding and defending to the death definite answers to questions which God has not clearly answered. Rob Bell has rejected this obsession, but that doesn’t make him a theological liberal. And didn’t Jesus often teach by asking searching questions rather than giving definite answers?

I’m not saying that this kind of reluctance to be pinned down depends on one’s theological position. It probably depends more on personality type. Left-brainers want definite answers and so tend towards Reformed or fundamentalist teaching which offers these definite answers. Right-brainers prefer to leave things more open and so are more attracted by liberal Christianity. Thus the correlation between theological preference and frustration with Rob Bell does not imply a causal link.

I suspect Rob Bell is a right-brainer. My suspicion is confirmed by what I read in Adrian Warnock’s post about meeting him. Very likely his R1 quadrant, “Strategic and unorthodox”, is dominant. That makes Bell reluctant to commit himself to any one position, especially on a matter which is not left unambiguous in the Bible. He is not being dishonest, just non-committal. But that doesn’t make him a liberal.

Yes, Bell tends towards one side of the argument rather than another. But he does not, I suspect, have a settled and definite position on it – and he doesn’t feel the lack of it. It’s a bit like me on the Rapture: from my past posts on the subject it should be clear that I don’t think it’s going to happen, at least not in the classic (but actually modern) Hal Lindsey

way. But I am not going to come out straight and say that it won’t happen, because Scripture is not completely clear on this, and so we won’t know until it happens, or its time is past. Rob Bell is wisely saying something similar about hell: he may not think anyone will go there, but he won’t say this as a definite position because only God knows. If someone pushes him to say what he thinks, he’ll probably say “I don’t know”.

In fact Adrian Warnock, a psychiatrist who surely understands different personality types and how to work with them, has pushed Bell for answers, and reports that

on at least a couple of questions I got some straight answers out of him!

It will be interesting to hear what those answers are, though sadly I will probably not be able to do that live on Saturday when Adrian’s interview is broadcast (on air and on the Internet) on Premier Christian Radio.