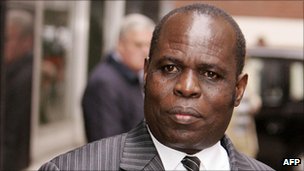 The BBC reports: ‘Miracle babies’ pastor to be extradited to Kenya:

An evangelist who claimed to have created miraculous pregnancies through prayer is to be sent back to Kenya to face child abduction charges.

I wonder, did Pastor Gilbert Deya really claim to have created something? Or did he claim that God did something in response to his prayer, and were his words misrepresented by a sub-editor?

Infertile or post-menopausal women who attended his church in Peckham, South London were told they would be having “miracle” babies.

But the babies were always “delivered” in backstreet clinics in Nairobi. …

“The couple went to Africa, came back into the country with a child that the authorities found out was not theirs through a DNA test.”

The miracle babies which are happening in our ministry are beyond human imagination.

It is not something I can say I can explain because they are of God and things of God cannot be explained by a human being.

Well, God can do miracles like this, and if he creates a baby it doesn’t have to have its parents’ DNA. After all, on the orthodox Christian understanding of the Virgin Birth Jesus must have had different DNA from his single biological parent – but, as I argued a few years ago, there may be more to that story than meets the eye.

But the evidence in this case seems to suggest that the babies in fact came from Kenyans unrelated to the childless couples. The child abduction charges are arguably not serious because the real mothers were very likely willing to give up their children for adoption, although clearly the legal formalities were not completed. What is serious, although perhaps not technically criminal, is the way in which Pastor Deya apparently deceived people into believing in miracles.

I know some of my readers here think that I believe too easily in claims of miracles made by preachers and evangelists. What I have always said is that we should look for evidence, and that if none is available either way we should not reject the claims of our Christian brothers and sisters or call them liars. In this case, however, there does seem to be clear evidence of deception. And so it is right that the minister be discredited, and be punished for his criminal activities.

4 thoughts on “"Miracle babies" pastor to be extradited”