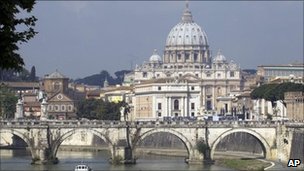 I have written here about prophesied, or predicted, earthquakes in California, elsewhere in the USA, and in the UK. But this one is new to me: a prophecy of an earthquake in Rome, with a specific date given: 11th May 2011, today! And it has been taken seriously enough that the BBC has reported it, including the following:

special programmes have run on state TV calling for calm. … There are reports of an 18% increase in the number of city employees planning to stay away from work.

I’m not sure whether these planned absences are really enough to justify the word “panic” used in the article. Indeed I’m not sure if this even implies more extra people taking the day off than the 35,759 who have so far viewed my post about the David Wilkerson prophecy. Nevertheless it is interesting that a good number of Italians are taking the prediction seriously. A similar report in the Guardian notes that

Education officials were said to be expecting school attendances to be down by a fifth as parents decide it is better to be on the safe side.

That would certainly involve a lot of children, and parents.

The source of this prophecy is unclear. It is said that the seismologist Raffaele Bendandi, who died in 1979, predicted that 11th May 2011 would be “the day Rome would be totally destroyed” by an earthquake, the end of the so-called Eternal City. But there is no record of him having made any such earthquake prediction. No reputable scientist would be so specific so long in advance. But it seems that Bendandi was a not reputable scientist; Wikipedia, in Italian, calls him “uno pseudoscienziato italiano”, an Italian pseudo-scientist. He did predict earthquakes, with some success, but never many years in advance. The Daily Mail suggests that he made the prediction of an earthquake today as long ago as 1915, when he was 22. But actually this specific prediction seems to have originated only a few months ago.

Although the news media have used the word “prophecy” for this prediction, that doesn’t really seem appropriate. There is no indication that anyone has suggested that it has a divine or other supernatural origin. The claim is rather that someone has predicted an earthquake by scientific or pseudo-scientific methods. It is really more like a weather forecast. And as, from past experience, predicting earthquakes is even more difficult than predicting the weather, if I were in Rome I would not be unduly worried today. But then I might be careful what I did “to be on the safe side”.