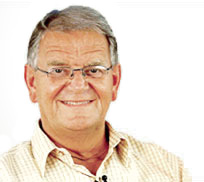 Terry Virgo, founder and leader of Newfrontiers, in a tweet yesterday just retweeted by Adrian Warnock:

Thanks @PastorMark for your courage & clarity in motivating us in Newfrontiers to move forward. Here we go!

“@PastorMark” is of course the “bully” Mark Driscoll.

So, is Virgo oblivious to the current storm about Driscoll’s bullying and generally unacceptable behaviour? If so, he needs to keep up better with the Christian news. Or is he endorsing such behaviour as the direction for “us in Newfrontiers to move forward”? I certainly hope not!

Virgo’s blog is currently not accessible, redirecting to a holding page with a circular link. Perhaps he needs to hide like this to shelter from the storm which might now blow in his direction. But can he hide from Twitter?

0 thoughts on “Terry Virgo of Newfrontiers thanks Mark Driscoll”