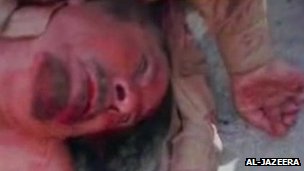 So Colonel Gaddafi is no more, reportedly along with two of his sons. The details are unclear, but it looks as if he was caught while trying to escape from his birthplace and final stronghold, Sirt. So, as I predicted, the Syrtis proved to be his undoing. Very few will mourn him.

It is unfortunate that the colonel died after apparently being captured alive. I hope he wasn’t killed deliberately. But it seems quite likely that he died of injuries sustained before he was captured.

It is a relief for the people of Libya, and for the whole world, that they can finally put the Gaddafi era behind them. I hope they are quickly able to rebuild a peace-loving and democratic society.