I am not a great fan of Doctor Who, although I do remember watching the first ever episode. But many of my readers are fans. So this post is my Christmas gift especially to them, and to Whovians worldwide.

The TARDIS, the Doctor’s time machine which on the outside looks like a British police telephone box, is famous for being bigger on the inside than on the outside. As reported by the BBC, an American Doctor Who fan has created a model TARDIS which, he claims, is “Bigger On The Inside. No, Really.” Apparently it’s all a matter of some software trickery called “augmented reality”.

I must say I’m not very impressed. My church in England manages to look bigger on the inside than on the outside. That’s not because of clever technology, but because its entrance is a small storefront and the sanctuary (at least that’s what they would call it here in America) is hidden behind the other shops. So it is easy to create this illusion, but not so easy for it to become a reality.

But it’s an interesting idea, a structure being bigger on the inside than on the outside. Where did it come from? The Doctor Who writers didn’t take it from my church, which was built in 1971. But could they have taken it from C.S. Lewis? In his festive post Christmas in Narnia Tim Chesterton, himself a Doctor Who fan, writes:

In the last ‘Narnia’ story,The Last Battle, we see the end of the world of Narnia. At one point in the story the children find themselves in a stable. Seen from the outside it looked small and dingy, but when they go through the door they find themselves in a beautiful country that seems to stretch on forever. Someone comments that the stable is bigger on the inside than it is on the outside. 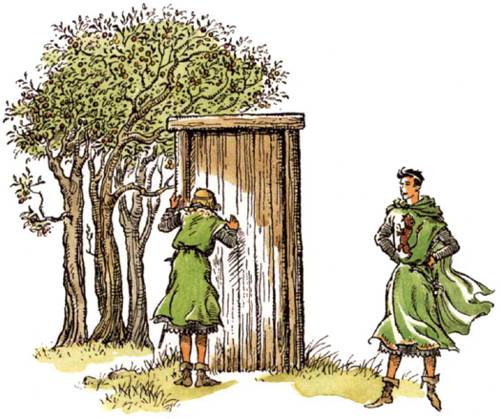 Indeed. The precise words of C.S. Lewis, in the mouth of the Lord Digory (p.128 of my Puffin edition), are

Its inside is bigger than its outside.

So, is this where the Doctor Who writers got their idea for the TARDIS? Quite possibly. Lewis’ stable is also connected with a kind of time travel, as it brought characters from the Narnia’s ancient past (indeed Digory watched its first dawn) into its last days. And The Last Battle (1956) was a recent book when the TARDIS was first shown in 1963. It is perhaps a good thing that Lewis never got to watch Doctor Who and see how his idea had been abused, as he died the day before the first episode was shown.

But where did C.S. Lewis get this idea from? Many of his science fiction motifs are derived from others, such as the spacecraft in Out Of The Silent Planet which is closely modelled on the one in The First Men In The Moon by H.G. Wells. In the case of the TARDIS-like stable, Lewis gives us a strong hint about his source in his next words in the story, also quoted by Tim Chesterton:

“Yes,” said Queen Lucy. “In our world too, a Stable once had something inside it that was bigger than our whole world.”

As Tim explains, the whole Narnia series is filled with implicit Christian teaching. But these words of Lucy are probably the only explicit mention of anything Christian in any of the books. So, it seems, the original TARDIS was the stable in Bethlehem – or whatever the building was where Mary laid her child in a manger. This stable couldn’t fly; in the legend of the Holy House of Loreto it was Mary’s family home which flew to Italy, carried by angels. But the stable was the birthplace of the only true Time Lord. Jesus was bigger than the whole world, and he still is as he reigns in heaven. But he allowed himself to become human, and even for a time to be limited by the body of a tiny baby.

Why did he do this? He did it so that we, his human brothers and sisters, could share with him what God intended for humanity, to rule over his creation (Genesis 1:26) and to be seated with Christ in the heavenly realms (Ephesians 2:6).

That birth in Bethlehem was only the beginning of the story. This Christmas, don’t stop at the end of Chapter One, but read on to the end, and find how you too can follow Jesus and play an important part in God’s reality show in this world, which is far more exciting than Doctor Who!

1 thought on “The True TARDIS in Narnia and Bethlehem”