In May I wrote about The Kingdom New Testament, the new title for N.T. Wright’s new version. As I noted in an update two days ago, the former Bishop of Durham’s translation is now scheduled for publication on 25th October, by HarperOne (a Murdoch company) and can be ordered from Amazon.com

– but not from Amazon.co.uk 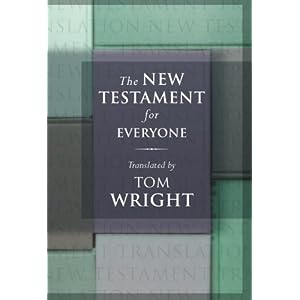 I thank Theophrastus for the information, at the new BLT blog, that apparently the same version has been published in the UK under a different title, The New Testament for Everyone

. This is presumably why the American title is not on offer in the UK. The UK version, published by SPCK (nothing to do with the Murdochs), is already available – it was published in July. I presume that US readers can order the UK version from Amazon.co.uk, as Theophrastus, at least, has a copy.

I wonder why yet another title has been chosen for this UK edition, after “The King’s Version” and “The Kingdom New Testament” were both rejected. It seems perverse that a title including “Kingdom” is acceptable in the anti-monarchist United States but not here in the United Kingdom.

But how suitable is this version “for everyone”? As I haven’t seen the text I cannot judge it. But in the past (the link is to a 2005 comment which I found from Google, but my criticism dates back to a 2002 paper) I have been critical of the claims made that ESV is “one Bible for all of life”, and of similar claims for other versions. I don’t agree that any Bible version is suitable “for everyone”, even for all English speakers, as different people need different kinds of translation. For this reason Wright and SPCK would have done better to stick with the title “The Kingdom New Testament”.

Theophrastus also discusses this version’s interesting rendering of 1 Timothy 2:11-12. I intend to discuss that in a further post.

0 thoughts on “Wright's NT for Everyone: Not the Kingdom in the UK”