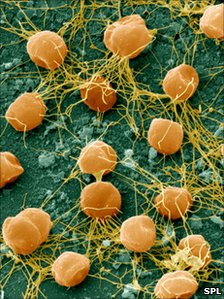 According to a new study,

natural selection may not be the only means by which higher organisms came into being.

No, this is not the latest anti-scientific rant from a creationist group, but a serious study published in Nature and reported by the BBC, under the title Protein flaws responsible for complex life, study says. The point is apparently that, at least as one group of scientists concludes, higher animals did not emerge from simple single-celled ones by Darwinian natural selection based on the survival of the fittest:

The authors stress that they are not arguing against natural selection as a process; they say rather that it can be aided by “non-adaptive” mechanisms.

“There’s been this general feeling that complexity is a good thing and evolves for complexity’s sake – that it’s adaptive,” Professor Lynch told BBC News.

“We’ve opened up the idea that the roots of complexity don’t have to reside in purely adaptational arguments.

“It’s opening up a new evolutionary pathway that didn’t exist before.”

Now this is certainly not rejection of evolution as a process. But it does suggest that the classical Darwinist explanations of it, as taught in schools and ridiculed by creationists, are not the whole story. As another professor told the BBC,

“We tend to marvel at the Darwinian perfection of organisms now, saying ‘this must have been highly selected for, it’s a tuned and sophisticated machine’.

“In fact, it’s a mess – there’s so much unnecessary complexity.”

0 thoughts on “Natural selection not the only means: scientific paper”