Some years ago I noted that Tony Blair does God, but only after he had left office, and that the next Prime Minister Gordon Brown was also reluctant to talk about God while in office. 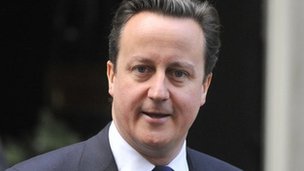 But their successor seems to have set aside this reluctance, perhaps a reflection of him being leader of the party traditionally associated with the Church of England. Indeed a BBC headline proclaims that David Cameron says the UK is a Christian country. This initially unlikely sounding assertion is explained in some of Cameron’s words:

Let me be clear: I am not in any way saying that to have another faith – or no faith – is somehow wrong. I know and fully respect that many people in this country do not have a religion. And I am also incredibly proud that Britain is home to many different faith communities, who do so much to make our country stronger. But what I am saying is that the Bible has helped to give Britain a set of values and morals which make Britain what it is today.

If by that they mean we shouldn’t try to claim a direct line to God for one particular political party, they could not be more right. But we shouldn’t let our caution about that stand in the way of recognising both what our faith communities bring to our country, and also just how incredibly important faith is to so many people in Britain.

So is this statement an unacceptable intervention by the state, in the person of a Prime Minister, into matters of religion? Or is it, from the other side of the coin, unacceptable for Cameron to bring his personal Christian faith into the political arena?

I would say it is neither. It is good and proper that a professing Christian is leading our country (that is by no means an endorsement of his policies!) and is prepared to speak out about his faith, in an appropriate context. It is right that he doesn’t “claim a direct line to God”. I’m not sure I would quite agree with his assertion that “We are a Christian country”, even in the way that he explains it, when there are so many here with other faiths or none at all. And it might have been politically wiser to avoid saying this, and possibly offending those who are not Christians. But it is his right as Prime Minister to do so.

It is also excellent that Cameron has been prepared to play a prominent part in marking the 400th anniversary of the King James Bible, not only in his speech in Oxford today but also in contributing to the People’s Bible project (whatever I might have thought about his choice of verses for the latter). I hope that this publicity will prompt more people to read the Bible, either in the KJV or better still in a more modern version that they will understand more clearly. And I hope and pray that they will not just read it but will take its message to heart and come to know the God revealed in its pages.

0 thoughts on “David Cameron does God”