Did the biblical author Agur son of Jakeh know something which researchers have only just discovered? He introduces a list with

Four things on earth are small,
yet they are extremely wise

and one of the four creatures he lists is the hyrax or rock badger, which

are creatures of little power,
yet they make their home in the crags. 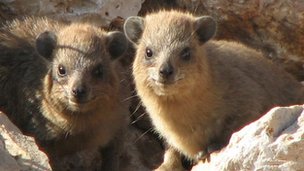 As I wrote before, this small furry mammal is considered a pest in modern Israel. But this also makes it convenient for study by that controversial state’s scientists. I didn’t know that the hyrax sings, actually rather like a bird. The BBC reports the discovery of Arik Kershenbaum and others from the University of Haifa that this song is surprisingly complex:

the order of the notes is significant, suggesting that the songs have syntax. …

This research places the hyrax in a small and eclectic group of skilled animal communicators, including primates, whales, birds and bats. …

… but it seems that Agur son of Jakeh knew better when he called it “extremely wise”.