N.T. Wright, the world renowned theologian and former Bishop of Durham, may be enjoying his new job as a research professor at the University of St Andrews – which is probably best known today as where Prince William met his bride Kate Middleton.

But Wright (no relation I think to Chris Wright who I quoted earlier today) is very likely missing his old home, Auckland Castle, which

– but apparently no longer. The BBC reports that the castle is to 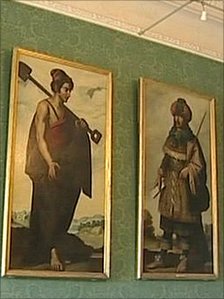 But there is good news:

Plans to sell off 17th Century paintings which hang in the home of the Bishop of Durham have been shelved after a £15m donation.

But the donation by investment manager Jonathan Ruffer means the paintings can stay in Auckland Castle.

The Church of England is acutely short of money. So it is not surprising that they decided to sell these assets to fund “Church efforts in poorer areas”. But it would have been a major shame for these wonderful paintings to be taken away from where they

have hung in Auckland Castle, in a room specifically designed and built for them, for 250 years.

So God bless Jonathan Ruffer for providing the £15 million needed to save them. I trust that this money doesn’t disappear into the church’s coffers but is indeed used to fund its work in poor areas.